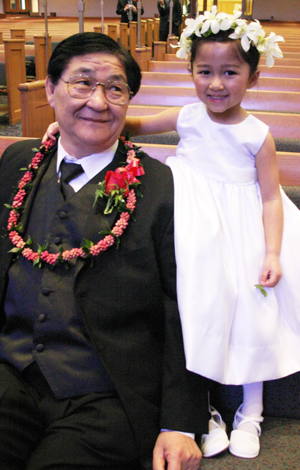 Today is Dad’s birthday.  He would have turned 70 years old.  Last Saturday our family met at the cemetery in remembrance of him.  Carpooling with my sister, I felt a moment of déjà-vu driving along the outside perimeter of the lush but partially frozen grass.  As we drove past tombstones speckled with the occasional bright silk flower arrangements dusted with winter frost, it seemed like only yesterday when we were burying Dad.  It’s almost been two years since he passed away, but visiting his burial place made me feel sad.  The injustice of how he died so suddenly still lingers.

After a brief and somber moment of remembrance, my family all piled back into our cars.  With my sister Joyce driving, my mom in the front passenger seat, and myself sitting right behind her, I listened to my nephew and nieces argue about something so unimportant I injected myself into the conversation.  And then I went there….

“Do you know how fortunate you are?  The kids in Ethiopia walk miles a day to get to school without complaining.  But you’re complaining that you’re being squished.  Maybe you should walk home.  It’s only a few miles.”

My poor 11 year old nephew who had the unfortunate pleasure of having to sit next to me, had no idea I was about to go ‘Tiger Auntie’ on him.

“When we were little, there were no car seats.  Grandpa had a landscaping van, a yard waste garbage truck.  Sometimes we would have to sit on the piles of garbage next to oil cans.  There were no seats or seatbelts.  When he made a turn we all had to hold on to something or we would find ourselves on the other side of the van.  If you were lucky, you got to sit on the tire well. “

At this point, my mom and sister were laughing hysterically in the front as I recalled all these crazy memories of my dad and our childhood.

“You have no idea how lucky you are to have a nice car, with leather seats and a DVD player.”  I said, trying to make a point.

My 9 year old niece, who wasn’t impressed by my stories, yelled, “and the DVD player comes with a remote!”

This is when the Tiger Auntie in me started laying into them about why it is important for them to hear these stories about their grandfather, my dad.  It is because of the many hardships he endured, they are able to live a comfortable life with almost endless opportunities.

“Do you realize when I was in Ethiopia, I met many kids your age who are domestic slaves?  Did you know your grandfather was a domestic slave during the war?  You need to know this!  The reason you are so fortunate today is because he sacrificed for us, so in turn we could sacrifice for you.”  At this point I was just getting warmed up, with my sister and mom still laughing at the whole situation as I attempted to educate the young ones in the car about why we honor my dad on his birthday.

The conversation didn’t last more than 5 minutes.  Between my nephew’s long eye rolls and my niece staring with me with a confused look because she couldn’t decide if I was being serious or not, I ended my conversation with them with this: “We remember because it is always important to remember where you came from and who helped you get to where you are today.  Someday you will have kids and you must pass this on to them.”

I have been thinking about the similarities of my father’s upbringing to the sufferings of people living in third world countries.  When both his parents died, my dad was orphaned, homeless, and a domestic servant (aka modern-day slave) during the Korea Korean War.  Lured by the promise of an education from a shady uncle, he was forced to work long hours day and night as a field worker at age 8.  When his older sister (my aunt) found him, she took him away and they lived on the streets with their younger brother.  Eventually, my aunt became a young war bride to an American soldier and she along with her brothers arrived in Seattle.

I share this story with you for several reasons.  For one, as mentioned before, it’s my dad’s birthday today.  And I’m thinking about him.  When I think about all he had to go through as a child and the lifelong hardships resulting from his youth, I appreciate his tremendous sacrifice to raise six children with my mom so we could have opportunities he never experienced for himself.  Our success was his redemption, joy, and hope.

Two, it is also Veteran’s Day today.  I am so thankful to my Uncle Willie, who served in the armed forces and married my aunt.  Because of them, my dad was given an incredible opportunity to have a better life which otherwise would have been horrible.  I would also like to mention how incredibly proud I am of my younger sister who is a Captain in the US Army and in the process of becoming a Major.  She’s served two deployments in the Middle East with others that I am very thankful for.  To all soldiers, past and present, God bless you and your families.

With the elections over and Thanksgiving less than two weeks away, I recognize all the many things I am thankful for.  I am aware of how much was made possible because of my dad and through my uncle’s service to our military.  I cannot imagine where my life would be today without the opportunity my dad was given to come to this country. 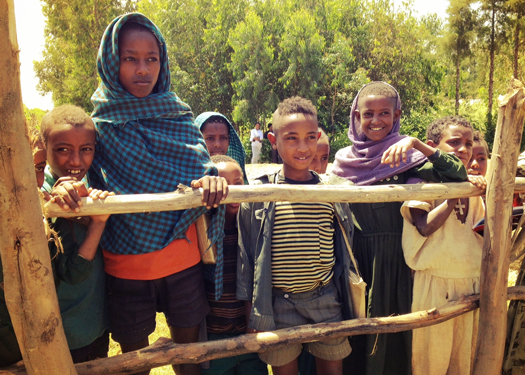 When I think about all the beautiful and wonderful people I met in Ethiopia, many of the challenges they face are the same ones my father faced.  We met plenty of orphaned children whose parents died of AIDS and forced into homelessness or domestic servitude.  I also related to parents working so hard to feed their children.  As a child of two immigrant parents who worked 16 hour days to keep a roof over our head and food in our mouths, their struggles are not lost on me.  Some of their meals reminded me of the rice and water soup we would have to eat when there was no food in our house.  My dad also grew vegetables from seed, so he could feed us in harvest months.  Although my dad was too prideful to accept public assistance, what little extra my parents had they would often give away to other immigrant families who were also struggling.  Working and sharing together became a way of life in our strong Korean community.

Three, I am grateful the United States government and their commitment to foreign aid in developing countries.  With the recent East Coast devastation and aftermath brought on by Hurricane Sandy, I have heard of amazing stories of people coming together to help each other out.   It is in that same spirit of helping others I would like to ask you to join ONE.org via ONEMoms, to lend your voice on behalf of mothers and their children who cannot speak for themselves.

As I have written before, ONE is a non-partisan, non-profit organization (co-founded by Bono of U2 ) with the goal of encouraging national leaders to support international development and relief programs through advocacy.  It is very critical and crucial that our collective voices be heard because of the “fiscal cliff” our country is facing at the end of the year.  Because of this fiscal cliff, devastating budget cuts will be made.  By signing this online petition, you are joining a multitude of voices urging congress to NOT make across the board budget cuts which will hurt those who depend on it the most.  Make it clear to our national leaders to not reduce the already the less than 1% funding (of our national spending) to developing countries like Ethiopia by signing this ONE online petition today.

To lend your voice is to lend a hand of hope where there was none.

As I reflect on my dad today and remember everything he had to go through in order for his ceiling to be our floor, may the promise of a better future be a continuing anthem of humanitarian compassion the world can know us for.
Please partner with ONEMoms by lending your voice and not your pocketbook today.

Here’s a beautiful compilation video of my recent trip to Ethiopia produced by ONE.  I hope it encourages you knowing YOU DO MAKE A DIFFERENCE!