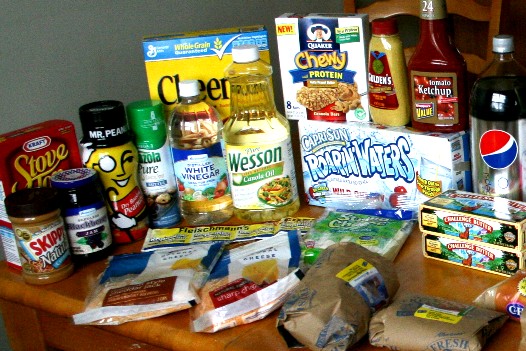 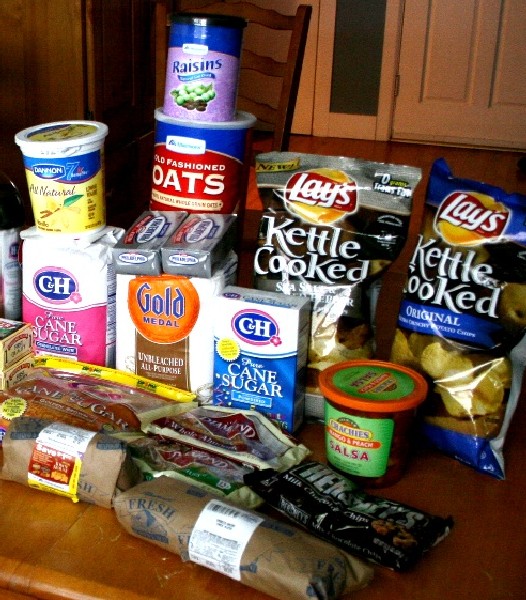 Because I know that new shopping ads go in effect on Wednesday around here, I thought I would make a shopping trip to Albertsons to get a few things I know are on sale.  I paid a total of $78.61 for 38 items.  My receipt says I saved $58.10.  Oh ya BABY!  I bought several of the necessities such as vegetable oil, sugar, flour, oatmeal, cereal, butter, cheese, meat, and lots of other things including 2 bags of Lay’s Kettle Chips.  <– For the record, these chips are a necessity.  One thing I had to keep in mind were my kids.  If you look at the pictures, there are some things that I wouldn’t buy for myself or my husband but because I have to pack lunches for my kids, I had to buy a few kid things too.  I think kid things are expensive.

Even though I bought lots of things, I found myself feeling a little stressed out when it was time to check out.  I couldn’t imagine what it would be like to use food stamps and not have enough money to pay for it.  I knew I would be well under the $130 budget I have, but I still have lots more to buy including produce.  So here comes the real challenge.. to buy what I still need for $51.  More to come soon.

Okay reality has set in.  What started out as a fun challenge (in theory) has become down right scary.  Last night I couldn’t sleep for 2 hours because my mind was so concerned with how I was going to spend the remaining $52.  I was betting on todays grocery ads to find some great deals but unfortunately for me they weren’t as hot as I was hoping.  I think its because the deals are the best before a major holiday and not so good right after.  I stopped by the grocery store closest to my house to see how much produce and fruit were going for and after doing the math in my head I started to panic a little a lot.

In the end I know it will all work out.  I had envisioned one thing, and now its turning into something completely different.  I have to rethink my menu and strategy.

Speaking of strategy, I am pissed at myself because I know that I should go into the store with a list and stick to the list.  That way I don’t impulsively buy things I don’t need.  Well after looking at what I bought yesterday I had buyers remorse.  Because I bought 2 bags of potato chips now I probably won’t be able to buy some ice cream.  I also bought a can of non-stick spray. <- I love that stuff!  But really for the sake of trying to make every penny count, the $2.50 I spent on it could have gone towards fruit. And I can use the butter or the vegetable oil I bought to do the same job.  And there were other items I bought not on my list that I’m regretting but I’m sure you can look at the photos and figure out it.  Bottom line is next time I’m sticking to my list. Period!

I think this is where the Hunger Challenge starts to become challenging.  I’m learning through this exercise that when on a budget one must stay within the budget and make tough decisions.  Already I have axed out some things I wanted to purchase because I know its not cost effective and within the remaining budget.   Oh the decisions I have to make!  I had this random thought tonight.. it would be really interesting if this challenge were 2 weeks long because I wouldn’t have to re-buy basics like flour, oil, butter, and sugar.  Its was a thought.

Hopefully tonight I will rest easier knowing I don’t have to worry about doing filet mignon anymore.  Just kidding. 🙂

I did make it over to Albertsons tonight and spent $1.02 total on a loaf of whole grain white bread.

Off topic.. this Sunday we will have 30 people over for dinner to celebrate my son’s one year birthday. We will be serving traditional Korean food plus a few other dishes.  Already I am thinking how blessed we are that we have the ability to even throw parties like this while others are trying to live off a $7/day budget.  Wish me luck that I don’t lose my mind the rest of the week!

So far we’re doing okay.  Still kicking myself for over shopping the first grocery trip.  I ran to Fred Meyers because their Kiva coffee was on sale with an in store coupon for $4.99 pound.  I bought just under a half pound of beans for $2 and a half gallon of generic Fred Meyer Vanilla ice cream for $2.  I did get to the grocery store yesterday.  I bought 30 lunch box apples, 10 kiwis, and 15 lemons.  Total bill came to $5.50.  Top Foods were selling these for 10 cents a piece.  Thank God for that.  Now I can have lemon in my water and not miss the diet coke as much.  I also went to Sams Club and bought 18 eggs for $2.15 and a gallon of milk for $1.79.  This brings us to a grand total of $13.44 for the day.  So far I’ve spent $92.05 for the Hunger Challenge.  More to come in the next few days.


I’ve been sick with the cold that last few days so not much to report for the grocery diary.  But as I’ve been thinking about this challenge a few things have come up.  #1) What exactly am I trying to accomplish?  #2)  Are those things in line with the spirit of the challenge? #3) I don’t eat as well as I could

Answer to question #1).  Well at first I wanted to come up with some creative meals all under the daily allotment.  I think this was not very bright of me because in reality land, I have a family to feed and take care.  And I am guessing that many families who are on government assistance or on a tight food budget aren’t trying to be the most creative with their meals.  Their priority is getting the meals on the table and keeping their families fed best as possible.

Answer to number #3).  I eat a lot of carbs.  Even though I eat a lot of oatmeal, brown rice, and other whole grains,.. I also eat potato chips, cakes, cookies, and other no no’s.  So I am thankful that this challenge has given me a new perspective on exactly what I’m eating.


So tomorrow we are celebrating my son’s first birthday.  I had to go to the Korean Grocery store to buy some things.  I can’t believe the prices of fruit, vegetables, and produce.  They are so cheap!  Cilantro was $.25  a bundle, onions were $.19/lb, green onions were 6 for $1, and grapes were $.69/lb.  That my friend is cheaper than grocery store ads!  Here is a breakdown of what I purchased.

I also have a confession, its no big deal but as I was leaving H-Mart I noticed the new conveyor belt sushi place was open.  I couldn’t resist buying myself a Las Vegas roll for $2.50 plus tax.  Total came to $2.74.  I figured I should splurge on myself since my dh splurged on Starbucks yesterday.  Right??

The total I spent today was $20.28.  Which leaves me with $1.63 left to spare.  That may not be enough for dinner out, but it certainly is enough for a latte or a small drip?!

All in all if I had to do this again I would not have bought so much to begin with.  Its hard to say but I think I could have saved at least $10 if I didn’t go so hog wild at the store.  But with that said, many of the items I purchased will last far more than a week.  If I had been doing the Hunger Challenge longer, I wouldn’t have to repurchase many things again freeing up money to buy more vegetables, meats, and fruits.  Although I think I did pretty well considering everything.