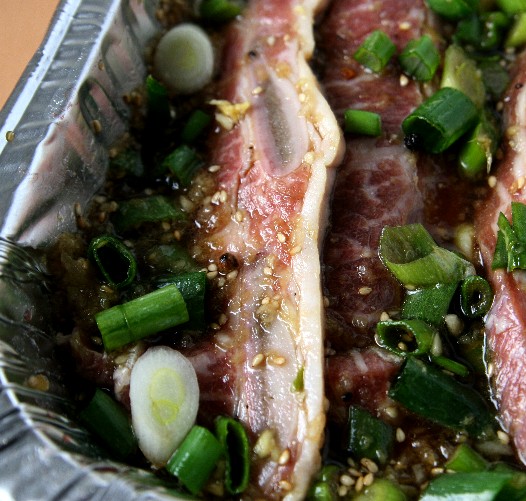 Tomorrow I am cooking for 30 people for my son’s first birthday. Koreans celebrate their childrens’ first birthday similar to a wedding reception, seriously. They invite tons of people, rent halls, serve catered food, hire photographers, and spend lots of money for this event. Although I am Korean, we will be doing none of the above. Instead I will make a handful of dishes, take my own pictures, and spend a lot less for doing so.

With that said I want to have a few traditional Korean dishes as well as a few other Asian ones. But a must have for me is Kalbi. Kalbi are short ribs which have been marinaded in a soy, sesame, garlic, sugar sauce and grilled on a charcoal bbq. Most Koreans have their own version and recipe. I called my mom and asked her for hers. She can’t give me exact measurements because she doesn’t cook that way but she does her best to give me approximates. She also said I had to put a kiwi and a can of coke or 7-up in there. Say what? I asked her why and she said it tenderizers the meat and that all the other little old Korean ladies at her church make it this way. In that case I better do it. Because those Korean ladies make bad *ss Kalbi.

I went to a small mom and pop Korean Grocer and bought 8 pounds of short ribs. I asked the owner how she would prepare the meat. She HIGHLY recommended that I marinade 2 days in advance and that I prepare the meat by cleaning it first. I had never heard of this but her explanation makes total sense. She told me that when they cut through the bone in the ribs, it leaves dust like bone particles everywhere. She even pointed to it and I could see exactly what she was referring to. Secondly she said by soaking the meat for 2 hours in a water bath, draining the water, and soaking it again for 2 hours it will get rid of the bone residue as well as much of the blood in the meat. In this sense, it prepares the meat to soak up more of the marinade.

This morning was the first day of soaking the marinade up. I had 2 pieces of Kalbi for breakfast and they tasted good however I think one more day of soaking will have everyone eating them in a state of nirvana. I will post more about my Kalbi adventure in the next day.