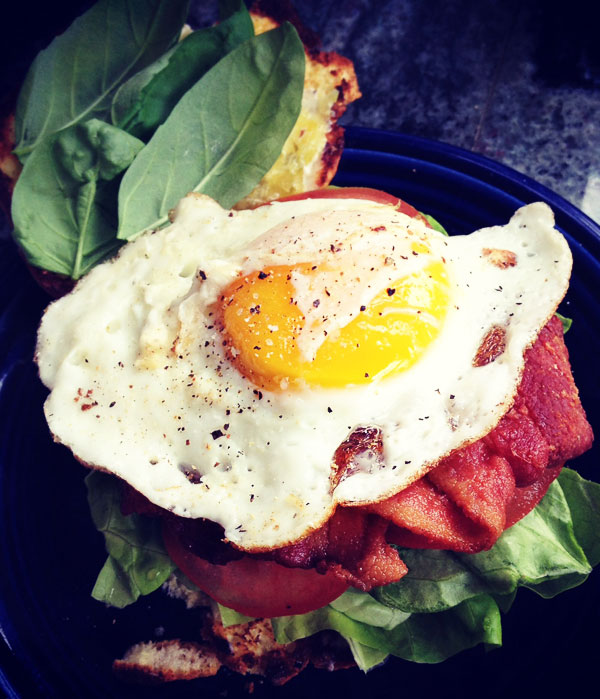 Ask my mom and she will tell you I was a very physically active kid. I was very fortunate growing up in a house where the actual house was centered in the middle of a nice green plot of land. My sisters, neighborhood kids, and I would race around the house all year long like organized track meets. Relays, running backwards, cartwheels, the two-man cart, and just about any other type of race possible would play out day after day. This was long before home video game systems. All we ever seemed to do was play outside -running around until dark taking short breaks for dinner and resuming our play until it was time to come in and go to bed. Those days were the best.

Korean American churches have always embraced competitive play as part of its community. Every summer there was a regional tournament for volleyball and track & field races for churches to compete against one another. These events were a big deal back then. Up to thirty churches would be represented. We would all meet at a large park where each church would set up a tent. The aroma of different types of bulgogi (SSL Bulgogi recipe here) and kalbi (SSL Kalbi recipe here) grilling was par for the course. Groups of people sitting together socializing and fellowshipping over different types of kimchi and sipping on cans of 7-Up and Coca-Cola – a cultural norm within our community. Whole churches would come out for these games just for the fun of it. I miss those days.

Back then there were a few rules when it came to the volleyball portion of the tournament. Each team had to have at least one girl on the team always in rotation playing. We grew up in a very small church. Our team was made up of very competitive high school, college, and adult men. Even at 9 years old, I was the only girl in our church who played sports. So guess who earned the position of token female on the court?

Every Sunday during the spring and summer months we would practice and scrimmage other churches at Greenlake’s lower Woodland park. Although I didn’t know how to play volleyball, I picked up the game quickly. I had to as a survival skill. Because I was the most vulnerable on the team, I instantly became an easy target to spike the ball on. But I was also tough. Every time I would get knocked down I would get back up. Whacked in the face. Whacked in the gut. Killer spikes coming at me. I only remember crying twice when it hit me so hard I thought I would pass out and wake up to the face of Jesus. But over the years I became a better player. Eventually when the ball would come at me hard I could bump it up perfectly to the setter. Learning to play volleyball like this was the best thing that could have ever happened to me.

When I graduated from middle school, I knew I would try out for the high school volleyball team. Being that volleyball is a Fall sport, try-outs and practices began late summer. I remember how nervous I felt trying out since I didn’t play volleyball for a real team or in any organized way – sorry but token girl does not qualify. But I walked on, tried out and learned that not only did I make the team, I made Varsity as a freshman. A few games into the season I was a starting Varsity freshman. Take that mean Korean guys picking on a young girl!

I continued to play volleyball in an adult league after my second child was born but stopped after an unfortunate game I played in. Between Mimi and Eli, I had a miscarriage. Although there is no real explanations on why miscarriages happen (I’ve had 3), when I was 8 weeks pregnant I was spiked on really hard during a volleyball tournament in my stomach. A week later at a routine checkup, my OB could not detect a heartbeat . My doctor told me she highly doubted the spike caused the miscarriage; the guilt of it all led me to stop playing volleyball ever again.

Fast forward to today. Eli is turning 5 years old next month and for months I’ve been thinking of playing volleyball again. Finally this week I told my husband that I wanted to start subbing on teams as early as next week and would start playing during open gym volleyball nights at the YMCA. Finally, I was mentally ready.

But wouldn’t you know, the moment I psyche myself into playing, I re-injure my shoulder badly. I’ve struggled with shoulder injuries since playing high school volleyball and tennis. A few months ago I tore my right rotator cuff and yesterday my shoulder started to pop in and out of place several times locking my arm up in a very awkward, painful way.

Upon visiting a doctor who specializes in sports medicine, she basically told me that my shoulder is dislocated and that I also could have a shoulder disease which is uncommon for someone my age. I’m scheduled for an MRI next week. Uh, this is not good. 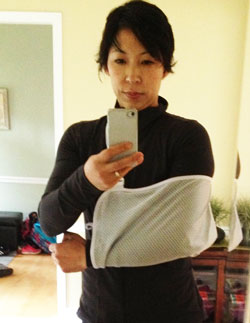 Yesterday I moped around the house feeling sorry for myself with my arm in a sling. Even cooking was hard because I’m right handed and I get shooting pains up my arm and in my shoulder from doing the simplest tasks.

Determined, I went to the gym this morning knowing I wouldn’t be able to work out like I wanted to. Instead I did simple shoulder exercises to keep it active using little or no weights. I left defeated. Rest is something I hate. I have felt so sidelined these last 6 months, getting exercise in has proven to be so therapeutic. Now I have to limit myself which hurts my pride more than anything, cause I’m strong girl with a weakened body.

But I will get back up. I will not let this deter me from playing sports again. It might be two steps backward, but I don’t care. If I have to inch myself forward, I will. Until then, if you can remember, please keep my shoulder in your thoughts and prayers this coming week.

Today I don’t really have a recipe, per se. However, today was just one of those days I opened up the fridge and scoured through the pantry to see what we had on hand. Found a hamburger bun, tomato, butter lettuce, half a package of thick bacon, and a few other things. The next thing you know I found myself making (then devouring) the most delicious sandwich. Although it’s a bit old school, it is one of those sandwiches I wish I would remember to make more often because it is so dang good. It has so many different elements and flavors going on that when you take a bite into it, it is a flavor explosion. A classic comfort food sandwich, this BLT (bacon, lettuce, and tomato) is bumped up quite a few notches with the addition of a crispy but runny fried egg, fresh basil leaves, and dill relish.

With an oozing custardy yolk spilling into the crevices of all the other ingredients, combined with the robust bacon, crispy lettuce, tangy dill relish, and sweet tomato slices sandwiched inside a toasted bun, this is definitely a hungry-man type of sandwich, no other side dish required.

Here’s to a better tomorrow. Enjoy!