I know this isn’t a recipe but I wanted to invite you to Foodportunity. If you live in or nearby Seattle, Keren Brown, aka Frantic Foodie is hosting this amazing event July 22. If you are are a food blogger, in the food industry, or just love food and being around others who love food this event is not to be missed!  I bought my ticket the first day this event was announced and can’t wait to attend.  Bites and wine are included with your ticket purchase of $25.  So buy your tickets!! 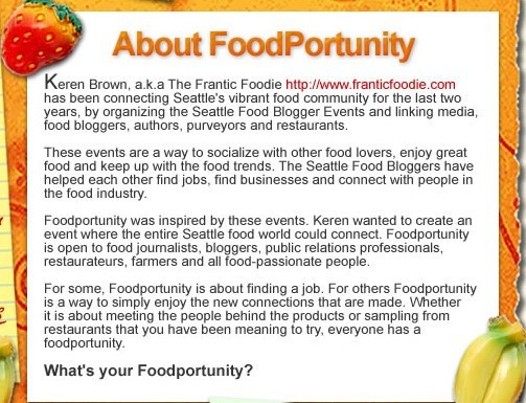 Tom Douglas, awarded National Restaurant of theYear by Bon Appetit magazine & James Beard-award nominee, will provide his Palace Ballroom facilities to host the event, organized by Seattle food blogger Keren Brown. It will feature appetizers from Seattle’s most talked about restaurants, the chance to network with food company representatives, a panel discussion on the topic of new media, as well as a “speed networking” event for the first 40 people to sign up.

Appetizers will come from several sources, including Tom Douglas’ restaurants along with a line up of Seattle gems such as Rovers, Andaluca, Olivar, Art of the Table, Dinette, Maximus Minimus and Serafina. Columbia Crest and Vin Du Lac wineries will pour their wines and other beverages will be available for purchase. A range of food products will be on display.